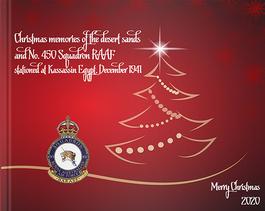 ​No. 450 Squadron was formed at Williamtown, NSW on 16 February 1941, together with No. 451 as ‘infiltration’ squadrons, i.e. units which, on arriving in the Middle East, would blend with a nucleus of experienced R.A.F. Officers to form a composite squadron.

This occurred at Aqir, Palestine on 23 June 1941 when No. 450 SQN RAAF combined with No. 260 SQN RAF. All of the ground crew came from No. 450 SQN RAAF, while No. 260 RAF provided the pilots and aircraft. On 29 June 1941 the squadron entered into the Syrian campaign, by attacking the Vichy French airfield at Baalbeck. This form of ground strafing continued until August when the two squadrons were separated and 450 SQN began to build up its own full existence. For the rest of the year the squadron was engaged in non-operational flying and serving largely as a salvage and repair unit.

By December 1941, the squadron’s first Kittyhawk had arrived and it moved to Egypt to work-up for operations. These began on 20 February 1942, with an uneventful patrol from Gambut. Two days later Sgt. R. Shaw was scrambled on interception and found a Ju88 at 20,000 ft. which he shot down south-east of Gazala. Further combats followed.

The squadron was mainly involved in fighter cover duties combined with escorts to Bostons day bombing, and this continued as the year drew on with the added complication of moving bases as the full retreat to Egypt was on. In October 1942, the squadron was involved in the Alamein breakout, at first attacking enemy airfields in the Daba area and escorting bombing and interdiction raids.

By now the Kittyhawks were being used as fighter bombers with 500 lb. bombs, in addition to their pure fighter tasks. The long push forward was now on with squadron personnel leap-frogging forward to establish bases to put the Kittyhawks in range of the enemy. At one point, No. 450 had to be restrained from moving into an area not yet cleared of Germans.

In one fortnight in November, 450 SQN moved six times; all this enabled the squadron to keep up a continuous cover for the Advancing army formations as well as fighter-bomber attacks. As the advance went on there were fewer and fewer targets for the Kittyhawks and their patrols were more in the nature of reconnaissance flights. However, on moving into Tripolitania, 450 SQN found plenty of ground targets in the Ju52 transports assembled to evacuate the Wehrmacht...

Thereafter a lull enabled the squadron to rest and come up to full strength before entering into the next drive onwards into Tunisia. Most of the operations involved fighter cover and sweeps over the forward areas but the occasional airfield strike livened up squadron life.

After an end of the year lull, 9 January saw No. 450 Squadron back in intensive action once more finally to enter Tripoli on 23rd by which time again targets were at extreme range for the Kittyhawks. As 450 SQN moved up again poor landing-grounds and heavy rains prevented a build-up of operations, however, by March 1943, the final land battles to eject Rommel from North Africa began. During this battle 450 SQN was used almost exclusively in ground-attack work and by the end of the month was working up to a high pitch once more, again moving to keep near the front-line and, at El Hamma, coming under German shell fire.

Then with the enemy evacuating, attention was switched to the great numbers of German transport flying troops out to Sicily; finally, 450 SQN went over to armed recce along the North African coast, attacking enemy vessels.

A rest period was followed by a move to Malta in July 1943, for action over Sicily. Here its role was that of interdiction behind the enemy line, bombing M.T. on roads, its Kittyhawks carrying two 250 lb. bombs each. It was soon operating from Sicily itself and then turning attention to the Italian mainland working behind the Salerno bridgehead, again on interdiction, and going into Italy on 17 September 1943. Almost immediately the squadron transferred to the Adriatic coast as the whole of Southern Italy came under Allied control.

The winter took a hand in reducing operations and during November No. 450 took a rest, resuming Rover operations at the end of the month. These were continued, as and when weather was suitable, into the New Year. As operations opened up in 1944 the squadron was engaged in a variety of tasks including long-range bombing, anti-shipping patrols and more tactical strafing and reconnaissance sorties.

As the Allies slowly moved northwards so the squadron kept up, entering into the offensive on the Gothic Line in August/September 1944. Then came another lull as winter once more set in. At the end of the year 450 SQN received a Mustang 111 with a view to re-equipment but this never came about, the squadron soldiering on with Kittyhawk IVs.

In the New Year interdiction sorties were flown as soon as the weather permitted but now the end was in sight. 450 SQN's last big operation was on Venice, operation ‘Bowler’, and attack on the docks with bombs. Final mopping-up operations, often under ‘cab-rank’ directions, were soon over and 450 SQN lingered for a further three months, and was disbanded at Lavariano on 20 August 1945.

CHRISTMAS GREETINGS TO YOU AND YOURS  FROM THE

​Whilst the 450 Squadron RAAF Association cannot guarantee the accuracy of this information, we believe the source is reliable.

Extract from Operations Record Book...
"40652 S/Ldr JEA Williams, Commanding Officer, had to force land, approximately 2 miles north of the road, after he and the formation had strafed the area for a distance of about 5 miles. He was seen to get out of the aricraft, apparently uninjured, and it is almost certain that he is taken prisoner of war"
Signed - MCH Barber S/L

The history of the famous

Access to genuine content for this website is solely dependent on the veterans, families and friends of
No. 450 Squadron RAAF.  We thank all contributors for their information and photographs. If you have any photographs, documents or other genuine information regarding the men and/or operations of  ​No. 450 Squadron RAAF, please contact our secretary to arrange for your details to be included on this website.

450 Squadron RAAF Association Inc. proudly presents the true stories and operational accounts of ​No. 450 Squadron RAAF ​and the 800 men who completed their WWII tour of duty  with this famous squadron, ​nicknamed the Desert Harassers®