Complete, and looking far better than first imagined, it was time to step back and take it all in. With a feeling of self satisfaction, and the knowledge that our fathers would be very proud of our efforts, we took a moment to pat each other on the back; but what would the public’s reaction be?

Saturday 18 September, Day 1 — 0800hrs: Armed with our new brochure, the 450 Squadron’s history in brief, Col Morton, Rod and myself began approaching people who showed obvious signs of wanting to learn more about the 450 Squadron and the purpose of our exhibit. Col, like father Christmas, had people lined up waiting to learn about his experiences with the Squadron, and he didn’t let any of them down. To our amazement, we were kept busy all day. The continuous stream of people that walked through the hangar that day, was unimaginable.
1700hrs: and the day ended on an amazing high, exhaustion aside.

Sunday 19 September, Day 2 — 0800hrs: Still getting over Day 1, we were releived to have Doug Norrie join our small team and continued our public awareness campaign with much excitement. The attendance numbers having dropped slightly from the previous day, seemed to have had little effect on the interest shown at our exhibit. A total of 750 patrons had stopped, viewed, questioned and had geniunely shown much interest in the 450 Squadron, over the two day period.

Will we do it again? Try stopping us! 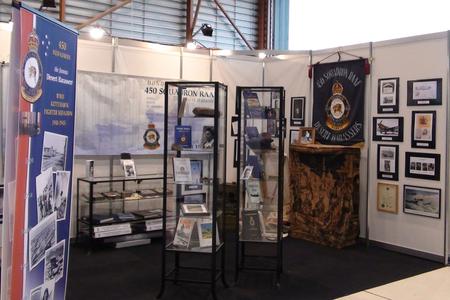 Thousands gathered at RAAF Base Williamtown on the weekend of 18 & 19 September to witness an Air Show of mammoth proportions. Thanks to the man in charge, S/Ldr Dennis Deering, 450 Squadron RAAF Association Inc. was right there in the thick of it, determined not to miss the opportunity to sing the praises of the famous Desert Harassers®.

With the much appreciated aid and support of Col Morton (veteran Pilot of the 450 all the way from WA), Doug Norrie (Historian) and Rod Brooker (Vice President) a top quality exhibition of artifacts and documents of the 450 Squadron was displayed for the very first time in the squadron’s history.

Friday 17 September, Set-up Day—Plan A: Initially our exhibition brief gave us the impression that there would be three carpeted walls to utilise. So with much to do, and only a few short weeks to do it in, I set to and designed the exhibit based on this assumption. Imagine the look on our faces when Rod and I arrived on the set-up day (one day before the show) to discover that there were only two uncarpeted walls allocated for the squadron’s display. We were about to get a taste of how our fathers felt when they arrived at a site marked out for a drome, only to discover their obvious lack of time and resources to complete the task at hand. Time to pull out Plan B...

What Plan B—Isn’t is amazing what can be achieved when success or failure rides on the decisions you are required to make in the shortest possible space of time?
Five hours later, after destroying Plan A and sharing a few curt words between us, we finally transformed the exhibit to suit our given resources with the result that Plan B was a much better layout after all, giving us a great deal more confidence to continue than we had dared to expect.

We were about to get a taste of how our fathers felt during WWII when they arrived at a site, marked out for a drome, only to discover their obvious lack of time and resources to complete the task at hand.