A True Story of the Great Escape

A young Australian POW in the most audacious breakout of WWII

On that fateful moonless night of March 24, 1944, scores of Allied POWs elbowed their way through a cramped tunnel ten metres underground in one of the most audacious escapes of World War II, the ‘Great Escape’ from
Stalag Luft III. Among them were Australian best mates and escape partners, Squadron Leader John ‘Willy’ Williams DFC and Flight Lieutenant Reginald ‘Rusty’ Kierath of the famous 450 Squadron RAAF, better known as the
Desert Harassers’ for their daring ‘harassing’ tactics that drew the ire of the Nazi propagandists.

In the 1960s Hollywood blockbuster, The Great Escape, Steve McQueen plays the irrepressible Captain Hilts, who ‘levies’ the bed boards of his fellow POWs to help shore up the ambitious escape tunnel. In real life, it was John who ran the famous levies and headed up the carpentry department of the clandestine ‘X’ escape organisation. Rusty worked alongside John.

The friends’ paths had first crossed as teenagers at the same Sydney school in the 1930s. John was a surfer from Manly and Rusty a boy from the bush, the country town of Narromine in western NSW. When war broke out their friendship firmed as they trained as fighter pilots, then went into air combat over the Western Desert in North Africa with the 450 Squadron RAAF.
Shot down separately, they were reunited in Germany inside the supposedly escape-proof Stalag Luft III. From this moment on their fates were inextricably linked.

John and Rusty were among the 76 POWs who made it out of the POW camp under the noses of their German guards. They boarded a train to Czechoslovakia, then setting off to walk through the thigh deep snow.
Their families never learned exactly what happened once the pair made it out into the forest on that dark, bitterly cold night… Till now…

John’s niece Louise Williams has drawn on family records and extensive archival research to paint a moving and intimate account of two exceptional young men who rose to every challenge and to tell, for the first time, a true Australian story of the Great Escape. In doing so, she discovered what really happened to John and Rusty in the Gestapo’s hands. 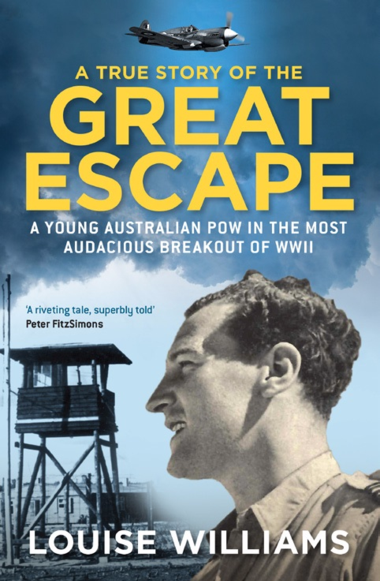