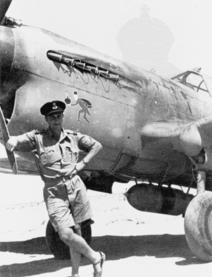 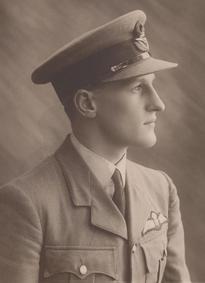 The true story of

John Williams, known as 'Willy' Williams was born to Australian parents in Wellington, New Zealand on 6 May 1919. Williams joined the RAF as a Pilot Officer in the UK on a short service commission in 1938. He did his flying training at Central Flying School at RAF Station Little Rissington, and at No’s 9, 13 and 10 Flying Training Schools, United Kingdom.

In August 1939 Williams was promoted to Acting Flight Lieutenant, relinquishing the rank on in October 1939, and was made a substantive Flying Officer in August 1940.
September 1940 saw Flying Officer Williams posted to No.21 Service Flying Training School at Kumalo, Bulawayo, Southern Rhodesia as a flying instructor. In August 1941 he was made a war substantive Flight Lieutenant.'Willy' Williams was then posted to No.71 Operational Training Unit in January 1942 where he flew Hurricane and Tomahawk aircraft in training.
In April 1942, Flight Lieutenant Williams received his first combat posting when he joined No.112 Squadron RAF, part of the Western Desert Air Force (WDAF) flying P-40 Kittyhawks. He joined No.94 Squadron RAF, and in May 1942, he joined No.260 Squadron RAF. Although he remained an RAF officer, Flight Lieutenant Williams was finally posted to No.450 Squadron RAAF at Gambut, Libya in June 1942. He was appointed 'B' Flight Commander. A few days later the squadron was forced to evacuate Gambut and retreat eastwards.
'Willy' Williams scored his first victory in June 1942 when he shot down a Messerschmitt Bf 109 near Gambut and this was followed with a Junkers Ju 88 near El Daba, Egypt in July. His final total was four enemy aircraft destroyed and two aircraft damaged. He is thought to have claimed an Italian Cr.42 biplane fighter whilst in 260 Squadron RAF, which if verified, would make him an ‘ace’.
'Willy' often flew Kittyhawks with the code OK-M which carried nose art depicting the cartoon character Mandrake the magician holding a lighted cannon ball. This was designed by one of the groundcrew, Bob McKinney.
Flight Lieutenant "Willy" Williams was awarded the Distinguished Flying Cross for courage, determination and devotion to duty. This was published in the London Gazette on 16 March 1943 and awarded with effect from 23 September 1942.
During the second Battle of El Alamein, Kittyhawks played an important role, carrying out many escort and ground attack sorties. In October 1942, ‘Willy’ was promoted to Acting Squadron Leader and was appointed Commanding Officer of No.450 Squadron RAAF, replacing S/Ldr. Ferguson.
On 31 October 1942, while strafing an Axis road convoy near Buq Buq, Williams’ Kittyhawk was shot down, when he accidentally flew into the line of gunfire from another member of the squadron (Sgt. M.C. Harrison RAAF, his No.2). He force-landed and was seen to get out of his Kittyhawk safely. The ground was too rough for aircraft to effect an immediate rescue and he was reported as missing in action. Sadly, Sgt. Max Harrison was killed in action on 14 January 1943 when shot down by Axis fighters during a bomber escort to Bir Dufan LG, Libya.
John ‘Willy’ Williams was captured on 1 November 1942 and taken to Stalag Luft III, where he was to remain until 1944. ‘Willy’ played a major role in the plotting and orchestration of the audacious escape; often sporting his threadbare shorts and sandalsAs chief supply officer, he was in charge of ‘scrounging’ the four thousand or so bed boards used to shore up the ten metre deep, 111 metre long escape tunnel and a myriad of other materials; all without the guards realizing that anything was missing. Rusty worked closely with him. According to fellow POW Jimmy James, Willy had also been outside the camp ‘on walks’, having used his school boy German to befriend the guards and talk his way onto work detail to a firsthand look at the forest. His expertise was an important element in what was to become a successful breakout…
On 28 March 1944 after a daring escape from Stalag Luft III, "Willy" and three other airmen were taken to the city of Brux, which is now known as Most, in the Czech Republic, and shot by the Gestapo. His body was cremated in the local crematorium on the following day, 29 March 1944. 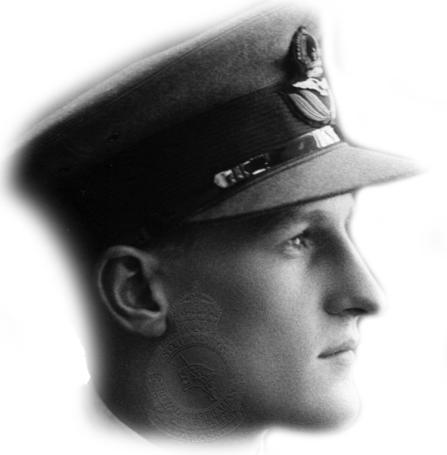